Chesterfield based artist, Anastasia Paskova, has been heartbroken by what has been happening in Ukraine since the Russian invasion, and the plight of refugees who have had to leave their homes.

Anastasia moved to England 10 years ago from Estonia. She is part Ukrainian through her parents. She told us that, as she listened to the news, she felt that she wanted to do something to help but didn’t know what. The young artist did, however, start working on a painting which expressed her
hopes and feelings.

That piece of work has now been completed and Anastasia will now be auctioning the painting to raise funds for Ukrainian relief. Anastasia said to us: “We live in a small flat with our 4 year old daughter, and I could not think what I could possibly do to help. Then I thought that, by selling one of my paintings I could perhaps do something at least. I would love to feel that we had been able to do just something that would benefit those poor people.”

Anastasia wanted to ensure that any money raised would find its way directly to where it was needed so her business coach, Paul Davies, who is a member of Chesterfield Rotary, suggested that she send the money via the Rotary organisation which has local members working on the ground in the countries neighbouring Ukraine. Paul explained “Rotary is an international organisation with members and clubs in most countries around the world. Our members in eastern Europe are working directly with refugees and we know that every penny raised will find its way to where it is needed.

The painting titled “Praying for Peace” is a 40cm x 40cm acrylic on canvas painting, and it will be auctioned via the website Galabid over the coming weeks: www.galabid.com/rotaryukraine .

There will also be 10 limited edition and numbered prints available for sale with all proceeds going to Ukrainian relief.

Chesterfield MP, Toby Perkins, is supporting Anastasia’s efforts. He said “Like everyone I have been moved by the terrible events in Ukraine. It is wonderful to see people like Anastasia doing something practical to provide help to those people in such desperate need.”

Four local charities have benefited from a £4,000 share-out, the proceeds of the recent Eckington VIRTUAL Classic Car & Bike Show 2020 organised by the Rotary Club of Chesterfield.

The money raised by kind sponsors, generous donors, along with a top up by Chesterfield Rotary Club, means each charity has received £1,000 each. The four charities are:- Ashgate Hospicecare, Bluebell Wood Children’s Hospice, The Elm Foundation (supporting domestic abuse victims), and Weston Park Cancer Charity.

This innovative online event was organised by the Satellite Group of younger members of the Rotary Club of Chesterfield to replace the usual annual event, which takes place each June at Renishaw Hall, but had to be cancelled this year due to COVID-19.

Chairman of the organising committee, Andrew Thompson, said, ‘We switched to an online event so we could at least raise something this year for our nominated charities as they have been so severely restricted in fund-raising due to the coronavirus pandemic.’

He added: ‘The date has already been fixed for next year’s charity fund-raising live event when the 2021 Eckington Classic Car & Bike Show will be held at Renishaw Hall on Wednesday 9 June 2021, and we are also delighted to announce that there will also be the exciting addition of the virtual online show running parallel to the main event – basically the best of both worlds.’

Two local Rotarians have been recognised for their vital role in successfully setting up a new vibrant group for busy younger professionals interested in supporting the local community with charitable events, projects, and fun social activities.

The new, Chesterfield Rotary Satellite Group, is part of the well-established Rotary Club of Chesterfield, and now has twenty-two members, both male and female.  The group (normally) meets monthly at Chesterfield Panthers Rugby Club. It most recently raised £4,000 for four key local charities with a virtual online classic car & bike show and has made donations to the local food banks.

Financial planner Peter Blant, the founding chairman of the satellite group, and business adviser Paul Davies, the satellite group secretary, have both been awarded Rotary International’s highest honour, a Paul Harris Fellowship for providing this exciting new approach to Rotary in the town.

The award was presented by Chesterfield Rotary president Nigel Metham at a special socially distanced ceremony (viewed online by members) on Friday 3 July 2020.

A long-serving rotarian has been recognised for completing 50 years of Rotary service. Past president David Jenkins, CStJ, was awarded a long-service certificate and a special 50 year Rotary badge at the club meeting held on Friday 2 August 2019 by president Nigel Metham. David Jenkins, 95, whose profession was Coal Industry Administration, first joined the Rotary Club of Chesterfield in March 1969 and has been a regular attender ever since. He was club president in 1981-82 and is the first of three long-serving rotarians being recognised by the club this year.

More recruitment of new members for the expanding Rotary Satellite Club of Chesterfield, which continues to attract busy younger professionals in the town wanting to do their bit for the local community. The latest to be inducted into the worldwide Rotary movement, by Chesterfield Rotary president Barry Thompson, are IT company director, Andrew Thompson, and insurance advisor, Phil Coates, and he was assisted by Satellite Club chairman Peter Blant. 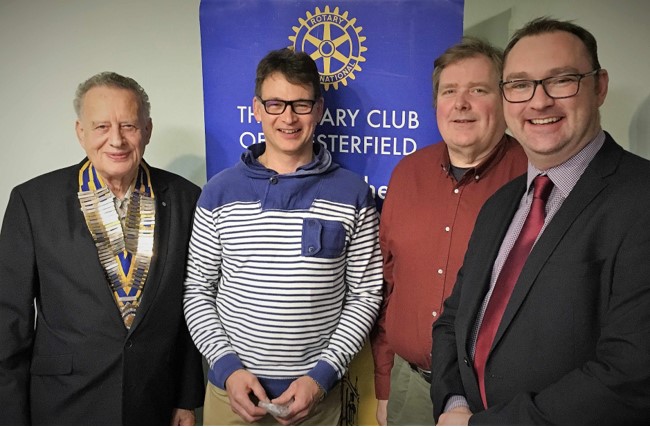 The final of the Chesterfield Public Speaking Competition for local secondary schools was held on Friday 18 January 2019 and organised by Chesterfield Rotary for the 53rd consecutive year.

The winner, in a high-quality competition, was Iona Blair from St Mary’s Catholic High School, with her political talk on ‘What’s the point of public demonstrations’.

Runners-up were, Megan Trevis from Hasland Hall Community School,  Abigail Maycook from Whittington Green School, and Leo Andrews also from St Marys. Organiser was rotarian Paul Davies, secretary of the Rotary Satellite Club of Chesterfield, who congratulated all the finalists on their excellent talks. 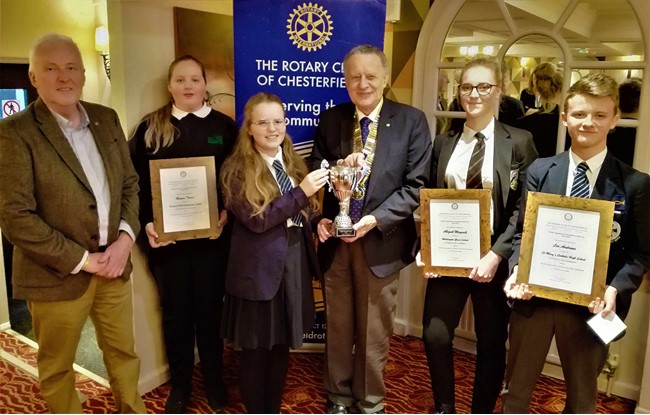 Thousands of pounds has been raised for local charities after the crowds really turned out in the summer sunshine for the area’s biggest Classic Car & Bike Show held at Rectory Fields, Ashover on Sunday 22 July 2018. With hundreds of cars and bikes from all eras on show, the event organised jointly by the Rotary Clubs of Chesterfield, Chesterfield Scarsdale, Clay Cross, and Matlock, is being considered to be ‘best yet’. 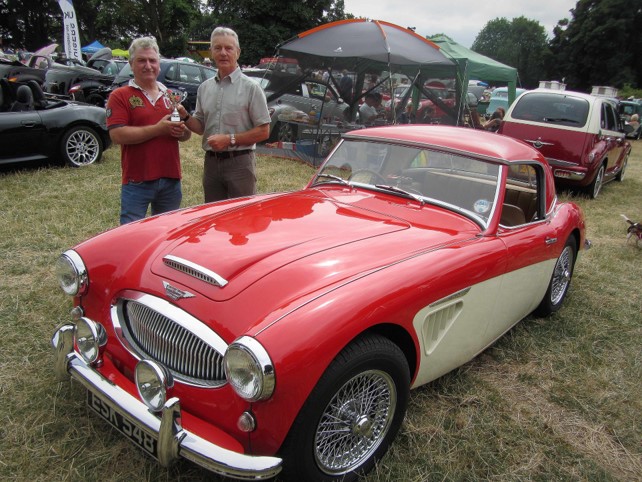 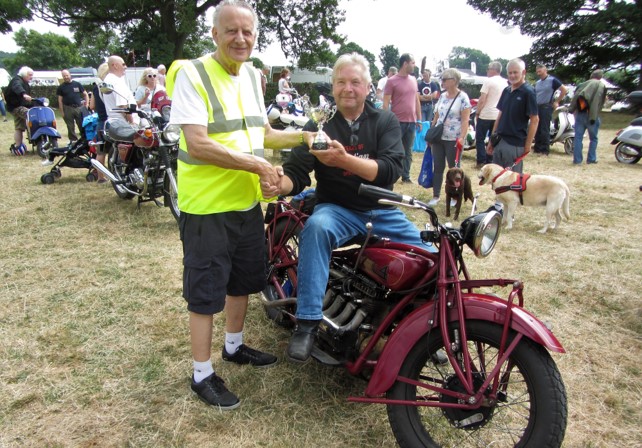 Hundreds of enthusiasts from across the region turned out for this year’s Eckington Classic Car & Bike Show held in perfect weather at Renishaw Hall on Wednesday 13 June 2018.  The event is expected to have raised a few more thousands which will be shared by four key local charities – Ashgate Hospicecare, Bluebell Wood Children’s Hospice, Sheffield Children’s Hospital, and Weston Park Cancer Charity. Winner of best car was Stephen Ashton from Ecclesfield, with his 1962 C1 Corvette V8. Also, congratulations to Jon Lambley from Alfreton, winner of best bike at the show with his 1949 Vincent Series ‘B’ 1000cc Rapide.

The winners were presented with their awards by Chesterfield Rotary president Peter Barr.

Next motoring event is the Ashover Classic Car & Bike Show being organised jointly by the Rotary Clubs of Chesterfield, Chesterfield Scarsdale, Clay Cross, and Matlock at Rectory Fields, Ashover, on Sunday 22 July 2018 (10.00am to 4.00pm). 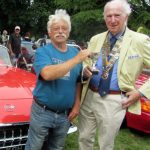 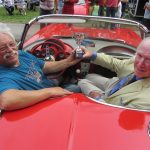 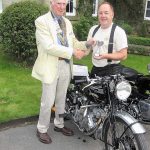 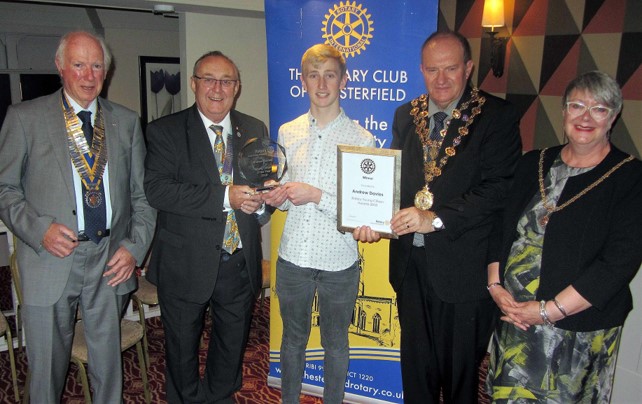 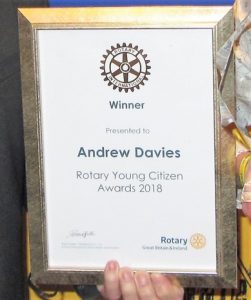 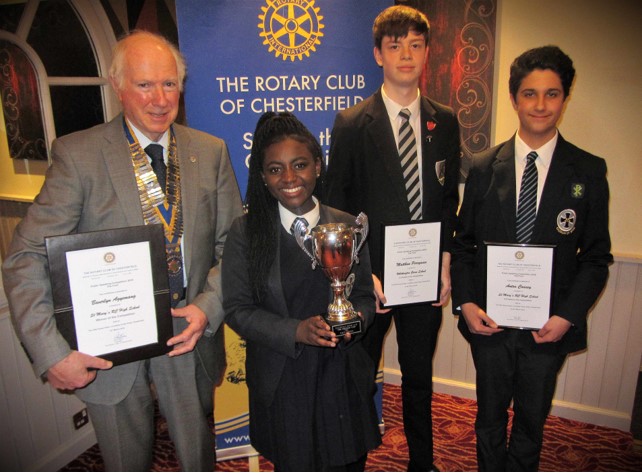