Youngsters from local primary schools in the Chesterfield area took part in the annual Junior Verse-Speaking Competition, organised for the 29th year by the Rotary Club of Chesterfield.

The overall competition winner, who was presented with a trophy, was Ethan Woolley with his rendition of the poem Columbus.

The event, which was held at Calow C of E Primary School on Tuesday 18 October 2016, was once again organised by Chesterfield Rotary past-president David Windle. 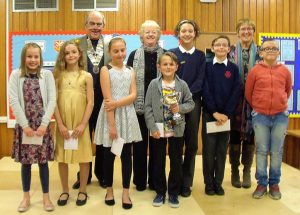