Around fifty senior citizens gathered in Kirkby’s Trinity Methodist Church on June 9th to celebrate the Queen’s official birthday on that day and her coronation on June 2nd 1953. The event was organised by Kirkby Rotary Club with help and support from Kirkby Inner Wheel Club, Central Co-op and Morrisons.

Rotarian Revd Eric Ashby gave a talk illustrated with slides on how as a Special Constable he was on duty at the Coronation, helping to line the processional route in London. Kirkby Colliery Band entertained with a selection of favourites old and new. Then the oldest person at the event, a nonagenarian gentleman, cut the cake specially made for the occasion by Rotarian Nigel Aston. The afternoon culminated in a sing-along of wartime songs such as White Cliffs of Dover and Lili Marlene, and ended with enthusiastic renderings of Land of Hope and Glory and the National Anthem.

The event was organised by Kirkby Rotary Club’s projects team led by Rotarian Melissa Blythe. She commented: “It was marvellous to see how much the guests enjoyed everything. We had so many lovely comments. It was even more successful than we had hoped and we’ll certainly put on the same kind of event next year. Thank you to everyone who contributed.” 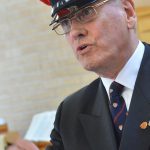 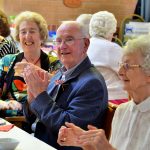 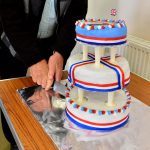