Earlier in the year, Rob reported that he would be taking on China’s “Great Wall Marathon”, one of the world’s toughest endurance races. It is a 26 mile race along this most famous landmark that was specifically built to be as inhospitable as possible! But, our Rob saw it as a wonderful opportunity to slot this into his studies in Ningbo, Shanghai in order to raise money and awareness for Rotary’s “End Polio Now” initiative.

Below is Rob’s own account of his feelings during the course of the race.

As my group was called up to begin the race I was experiencing one of the most severe cases of nerves I’ve ever had. Looking around at the other athletes, my heart sank as I noticed the majority of them were running the half marathon rather than the full. I overheard an Aussie, built like an Olympic athlete, talking to one of his friends: “The full marathon?! You’ve got to be kidding, I’m not a Muppet!” Although I had trained hard for this event, I don’t believe anything could have prepared me for a marathon that is considered in the top 10 most challenging in the world. To be honest, the closest I had come to a “super challenge” was when I failed miserably at a 72-ounce steak eating challenge in Texas! I felt like a fraud who was soon to be exposed.

The gun went off and… it had begun, 26 miles of what I anticipated to be pure pain. The first five km were a relatively simple climb on a tarmac road up to the Great Wall. This gave me the opportunity to get my head straight and remember why I had signed up to this event in the first place… It was about nine months ago when I heard about the Great Wall marathon race and I thought: “That sounds like fun, let’s go for it!”

But, as the road got steeper and I breached the austere wall, I developed a strong dislike to the naive part of my brain that had driven me to this decision and I was in the mindset of simply trying to finish the thing. Appreciating the majesty and magnificence of this amazing structure was definitely not on the agenda. Instead, all I could think was: “why on earth did they build a wall here? It’s just mountains, who would want to invade this place?!”

As I continued the run, however, I started to get into a flow. I was feeling pretty comfortable and I started looking around at the amazing scenery that surrounded me. What was even greater was the support given by the locals. People young and old lined the streets clapping, giving high-fives and shouting: “Jia You!” I even got into a water fight with a few cheeky kids who are hiding behind trees with water pistols.

I was really starting to enjoy myself and I was still feeling fit as the next trudge up another mountain began. I think a lot of credit for my positive state of mind can be given to some Japanese sweets a friend had given me. They were basically sugar-flavoured sugar, a perfect concoction for marathon race.

As I hit the 18-mile mark, despite my sugary state and the amazing support of the locals, I started to feel my legs slowing down. It was very tempting to go sit and chat with some of the spectators for a while. Fortunately at this point I recalled a totally unrelated phone conversation I had with my Nan a few weeks prior. I was congratulating her on the fact that at the age of 78 she is still working: “Well Rob,” she said, “if you stop you’ll never start again, so I’ll keep on going for now.”

These words resonated in my head until I got to the last five miles, which are considered the hardest not only because they’re the last but because there is an almost sheer vertical climb up steps, then along a cobbled section of the wall. The crescendo is a two-mile knee-shattering downhill run to finish line.

I looked down at my watch and noticed I had around 45 minutes to make the 5 1/2 hour finishing time, which is considered pretty decent for an amateur. It was then that my slightly ridiculous competitive streak came out. I ate my final Japanese sweet and pumped my way up the steps, past bewildered competitors who were clutching the side of the wall like drunken zombies. I was finally really appreciating the wall. I didn’t understand why they built it but I came to the conclusion that the ancient Chinese had had really good foresight and could predict people would use it for a race sometime in the future.

With 22 minutes left on my watch I let momentum take me down the hill hoping my legs kept moving. As I went across the finishing line I totally forgot to celebrate because I was fully focused on meeting my self-imposed deadline. Looking back I must have appeared like a total plonker as I ran down the 50m finishing straight with my eyes fixated on my stopwatch. But to my delight, I crossed the finishing line in five hours, 30 minutes and 22 seconds!

It was only when I got back to my hostel in Beijing that it really kicked in and I realised what an absolute honour it was to have had the opportunity to run on the Great Wall!

I am so pleased that I signed up “naively” to this race nine months ago. It goes to show that if you put your mind to it any challenge can be achieved no matter how big or little.

We are “this close” to eradicating Polio forever! Small donations go a long way, for example, the price of a beer can give several children a vaccination which halts the chance of them failing foul of this terrible condition.

Should you wish to help with a donation please send your cheque made out to “The Rotary Club of Wollaton Park” to PP Alan Parker, at 8 Deer Park, Wollaton, Nottingham, UK, NG8 2NX or alternatively donate on-line at Rob’s Just Giving page at www.justgiving.com/robavery-phipps

Many grateful thanks for your help
Rob

Before the event, Rob made a video explaining why he did it:

Rotary District 1220 say: Very well done for your achievement of completing the Great Wall Marathon! You have the admiration of all of us for your quite remarkable project and your dedication to complete it!! Once again you are raising the bar and you deserve all the accolades for it. 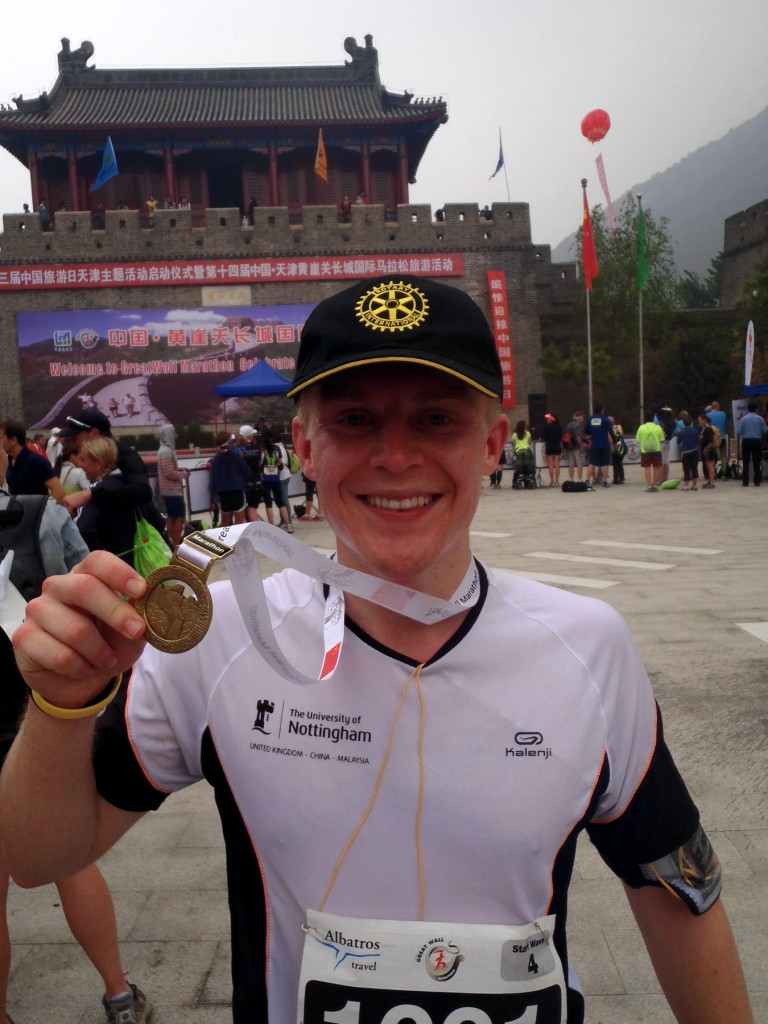