With just 8 days to go before the start of the 2015 Poppy Appeal the Royal British Legion made an emergency request for somebody to run the Appeal in Dronfield. The incumbent organiser had stood down after many successful years in the role and there was nobody to take on the task.

The club agreed they would take on the task as an emergency project and quickly set about identifying members of the community who had previously help with collections. Two Rotarians collected numerous boxes of Poppies and collecting cans along with other Poppy appeal products such as lapel pins, pens and rulers from the distribution centre. The main supermarkets in Dronfield were approached and three agreed to allow us to sell the range of Poppy products. Forty additional locations where identified including the towns sports centre, doctors surgery, schools, shops and offices. The task of delivering Poppies and collecting cans to these locations was undertaken by Rotarian volunteers.

The towns Army Cadet Force and Air Training Core were enlisted to help with weekend collections at the super markets with weekdays covered by Rotarians and community volunteers.

Once the appeal had closed Rotarian and volunteers came together for a morning to open and count the contents of collecting cans. A grand total of £11,066 was banked into the Poppy Appeal bank account which we felt was an excellent result. 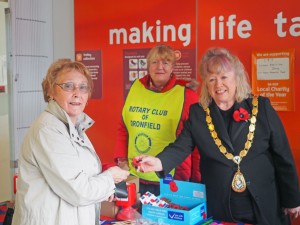 Dronfield Mayor Liz Blanchard helping out at the appeal 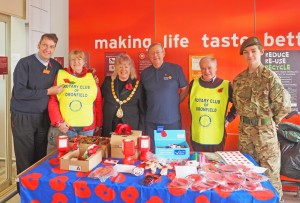