Rotary District 1220 – Shoulder to Shoulder with the Royal British Legion

The Poppy Appeal is one of the most recognisable charity appeals and for every £1 raised 78p is spent on charitable activities. A staggering £1.6million per week is spent on health and welfare for families in need.

2013 is the third year that Rotary clubs in District 1220 have worked shoulder to shoulder with members of the Royal British Legion branches throughout our District on the Poppy Appeal. The idea for this worthwhile collaboration began in June 2011 after the Rotary Showcase in the centre of Nottingham when I had a meeting with the then Lord Mayor, Michael Wildgust, who asked for our help.
It was clear that the Nottingham City branch of the RBL had difficulties in covering large venues for two weeks with their dwindling and ageing membership and that there was great potential to increase revenue from the Poppy Appeal if extra manpower was available to cover collections at the major shopping centres and stores.

I decided initially to ask clubs in the Central and Trent groups for their help and we ran a pilot project in November 2011 which proved to be very helpful and successful. The RBL were delighted with Rotary’s involvement locally in Nottingham so I asked for support to make this an initiative across RIBI where the RBL needed our help and this was duly adopted. I had the opportunity to speak to a meeting of RBL Poppy Appeal co-ordinators from all over the UK in Birmingham and they were very enthusiastic about the liaison with Rotary. They were given Rotary contacts in every District and the Poppy Appeal results since have been phenomenal across RIBI with our help.

Firstly I will speak about Rotary involvement in central Nottingham, purely as I have been closely involved in the planning and execution of collections in four large venues for two weeks. Clubs in Central and Trent groups offered their services again and each club accepted responsibility to cover collections on their allocated dates. Some clubs have been involved with the Poppy Appeal for many years.

No doubt many readers of this article will know the difficulties we have in Rotary with our sleigh collection schedules so just imagine organising a rota for a total of 360 hours with two people on duty at all times over a two week period, a total of 720 hours to cover!

After endless emails and telephone calls the rota was complete and collections began on Saturday 26 October. In central Nottingham alone over 350 Rotarians, their families and friends took part in the collections and the feedback has been excellent. Everyone really enjoyed the experience again and it truly reflects the strength of the “Poppy Appeal” brand which is so well supported by the generous public. It also gave Rotarians wonderful opportunities to be highly visible, wear their club tabards and engage the public in talk about Rotary. Many leaflets were handed out and the awareness of Rotary has certainly been improved. No longer will Rotary be remembered just for our sleigh collections!

Turning to the rest of the District it is apparent that many clubs have been helping the RBL for many years and I had not realised that we have so many RBL members in our ranks as well. DGN Roger Summers has again been co-ordinating Rotary help in Derbyshire where needed and overall throughout District 1220 over 45 clubs have been very active with the Poppy Appeal this year.
All of this effort to fill the tins is not the end of the project as hundreds of tins have to be retrieved from other collection points, the proceeds counted and banked. At the time of writing the three central venues manned by Rotarians in Nottingham have passed £30,000 which is a record amount and a suburban, Sainsbury’s again manned by Rotarians, collected a staggering £8,350.
Figures for Derbyshire are not yet available, they are still counting. It takes weeks to finalise the collection total but we should be well up on last year’s figure. Rotary has really made a difference.

I wish to say a huge “thank you” to everyone who has willingly taken part throughout the District and given freely of their time. It has been wonderful to see so many Rotarians spending time together with a smile on their faces, chatting to the public and really enjoying the experience. The way that clubs and individuals have worked together has been inspirational.

At the RBL Ball recently I was surprised and delighted to be presented with a framed certificate awarded to Rotary District 1220 recognising the help and support given to the Poppy Appeal. I was even more surprised to receive a similar personal award but as I have said on previous occasions, none of this would have happened without the help and support of fellow Rotarians.

We are already planning next year’s Poppy Appeal and I am confident that Rotarians will once again be shoulder to shoulder with those RBL branches that need our help. Long may it continue as we support the largest charity that helps service personnel and their families! 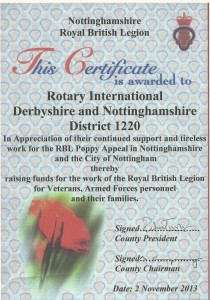 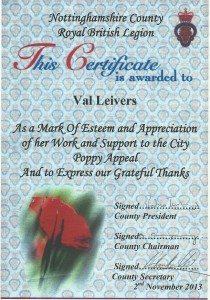