A children’s hospice charity has benefited from a Santa’s Grotto created by a local garden centre and run by a Rotary Club.

At the Reuben Shaw garden centre in Moor Green, Kirkby Rotary Club recently presented a cheque for £2000 to Emma Vizor, chief fundraiser at the Sheffield-based Bluebell Wood Children’s Hospice. In the four weekends leading up to Christmas, around 800 children visited the grotto, which was set up and decorated by garden centre staff, with Santa, his helper elves and children’s presents provided by Kirkby Rotary.

Ms Vizor said:” We have now received donations totalling £9,500 from the Rotary club over the past three years. This massive contribution makes a huge difference to our work of offering care and support to children with a shortened life expectancy and their families”.

Roger Pursey, president of the Kirkby club, responded: “The 2014 grotto was a superb success and achieved all we hoped for”. He presented the garden centre’s owner, Mr Reuben Shaw, with the club’s Certificate of Appreciation. Mr Shaw in turn commented: “The opportunity the grotto gives us to blend charity with the commercial aspect of Christmas is fantastic.” 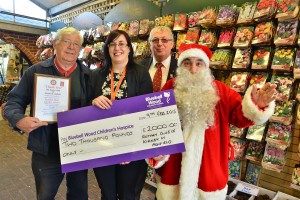