The first ever Charity Quiz Night organised by the recently-formed Rotary Satellite Club of Chesterfield has raised £630 to be shared by three local charities:- Ashgate Hospicecare, Sheffield Children’s Hospital, and Wirksworth based Rotary Aquabox, which is a leading provider of clean water and other humanitarian aid to disasters around the World.

The first winners of the new Challenge Trophy was ‘The Fab Five’. 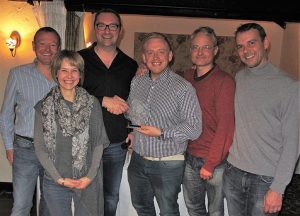 The fun event, supported by around 100 people, was held at the Fox & Goose on Thursday 17 November 2016 and was organised by rotarian Paul Davies of the Satellite Club.