Shedding a Light on Homelessness

District 1220 Rotarian Keith Turney from the Rotary Club of Keyworth and Ruddington and MD of Central High Rise, attended Framework’s annual Sleep Out this year. Unlike other years the night was warm, so did he get any sleep?

The theme for the Sleep Out this year was ‘Shed a Light on Homelessness’. Part of the Sleep Out evening’s content is the Box Factor Competition where participants are invited to compete for the best Sleep Out construction which you must then sleep in. The winner is the individual or group of people who provide a viable construction which best depicts the theme. Last year I won the Box Factor having constructed a Fruit Stall representing the ‘Covent Garden’. Planning to be especially clever but did it pay off? I don’t blame myself you understand! Following good advice I included an additional strap line, “For the Dignity of the Key”, something I thought of last year.

6pm Friday Night. Sara Blizzard on East Midlands Today said, there “would be rain at 3.00 a.m. Sunday morning”. Great! I made sure the construction had a polythene outer layer, the upper level devised and made to protect my exhibition from ‘this forecast rain’. Weatherproofing I hoped had been installed so that if the rain deluged there would be no leaks. My den appeared like a suitable subject for ‘Arthur Clark’s Amazing Small Spaces’

So there it was; a polythene clad rectangular box made out of timber struts open at one end and an upper level of similar construction but lower in height. Timber is not cardboard but last year had shown me that once you construct above waist height then the construction will sag, especially if it’s a bit damp, any way the structure was cardboard lined. The theme was ‘Shedding a Light in Homelessness’ so my idea was to create a structure that showed Homelessness in two ways. The upper level contained two carrier bags full of cloths titled WARDROBE, a box titled HOME, a pile of Newspapers titled BED, and then a large replica Key with its strap line ‘FOR THE DIGNITY OF THE KEY’. 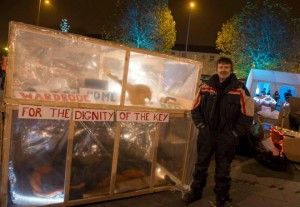 Keith outside his shelter for the night

The people nearby, my neighbours, if you like, who had been homeless in the past rewardingly identified with this alternative tag line. It rang true to them. One explained how instead of carrier bags a knapsack and its contents quite literally kept him alive. I mentioned the weather being warm but normally at this time of year cold kills. My man said he’s attended several funerals and he only recently attended a man’s funeral where none of the other 6 brothers would attend his, this being nasty but a normal part of the stigma of homelessness.

Two walls and the ceiling to the upper and the lower boxes were lined with cardboard and then covered with foil which was intended to radiate light from the torches at both levels. I was the exhibit on the lower level. Again two walls were left open as I would be seen lying on the cardboard bedding at pavement level.

I am competitive and I was proud of my Den. However, a tour of the site revealed that the landscape of the whole square resembled an estate of a wild architect and a bizarre storytellers’ dream: most were proficiently built. The competition for the Box Factor this year was fierce to put it mildly. I felt therefore lucky to become a runner up alongside a group from Lymms who were also representing the Inner Wheel Club of Keyworth and Ruddington with a construction that had a Lighthouse depicting the theme.

The worthy winner added Santa going head first down a chimney. Still, I wondered if in the morning I may prove to be insufferably smug as I stood proud against my waterproofed den which was designed to remain standing after a predicted soaking. The following morning I expected to witness the vision of melted looking structures as if heat had got the butter icing. I was expecting to be refreshed after a good sleep while others shivered because their unprotected cardboard dens would first sag and then stick to them providing no barrier between themselves and the elements.

Did it rain? Not a drop!

I could have spared myself the construction of the upper deck also and I need not have suffocated in my heat retaining air tight creation. But considering how history has taught us how the Luddites treated boasted constructions, perhaps I was spared some rough treatment from a resentful sleep deprived mob. Still, the warm night this year promised I would not wake up at 3 a.m. absolutely frozen as in previous years, so I would benefit from a good night’s sleep and there would therefore be no need to catch up the day after as I had needed to in previous years. I went to bed at midnight and began the ‘live’ part of my exhibit at pavement level.

I lay back nursing my back after a long day building the den both in my garage and finishing it off at the Sleep Out followed by a walk around the square chatting and admiring other constructions. As I rested I became aware of how noisy the square was. People were treating the warm weather as if it was a summer’s evening, some lay in the open looking ready to sleep, some had retired to their dens but a lot of insomniacs were wide awake and partying, the invasion of the street lights into my den and the illumination of my torches was not helping either. Being prepared, I brought a tarpaulin. I abandoned the ‘sleeping beauty’ exhibit bit, and placed the tarpaulin over the viewing walls and then switched off the torches. But at 1 a.m. as I again laid back it became obvious that the darkening of my den seemed, if anything, managed to magnify the cacophony of sounds; screams, laughs, jeers, conversations. A party were even playing ‘eye spy’ using the limited edges of the street light to illuminate their game. I think the sound which distressed me most, however, was of somebody snoring! How lucky that person is to be able to shut out the sounds of a Karaoke evening on St Pancras station.

It must have quietened at some stage I think its 3.00 a.m.; about the time I rise after persuading myself I am still comfortable trying to maintain a frozen lay in. I remember being awoken by the sound of cardboard being dragged to the onsite refuse lorry. My den which took 12 hours to build now only took 12 minutes to demolish. I did a good construction job; I don’t suppose other dens needed to be kicked in order to part the timbers. Still it was nice to be able to move around freely first thing in the morning this year unlike the previous years where I would have to force my frozen and gelled body which would be yearning for warmth to rise from under the covers or out of the bag.

The queue for bacon butties on previous Sleep Outs comprised of silent pasty faced survivors who shivered and hoped that eating a butty and a sip of tea held by shivering hands would put some life back into their souls as well as their bodies. This year everyone was as lively as last night although jaded slightly from a lack of sleep they were still enjoying humour. The joy of the event is one of the reasons why I continue to attend the Sleep Out. In the first place I attend this event for the camaraderie.

A comment made about my Runner Up rosette highlighted another very good reason why I join the event ‘It’s a bit amateurish isn’t it’? Exactly, that is where the treasure is. Framework’s upper management does not consist of a faceless board of executives who may commission professional yet impersonal set of awards and thank you’s. This management know what individuals have undertaken. I was flattered when they told me that they had read my blog and remembered my previous efforts. They attend this event along with the rest of the nutcases who think the perverse act of sleeping rough on the street for a night out is fun. Framework demonstrates the friendly face of help and not the belittling jobs worth approach. Loyalty to Framework is demonstrated by previous Framework beneficiaries joining in with these Sleep Outs.

Last night was warm, it was a cushy one this year! The weather after the weekend of the Sleep Out however predictably worsened and as winter continues so temperatures will plummet through the day and the nights may become unbearable. Others during this time will be sofa surfing, or looking for a temporary or permanent bed. These people range from those who are perhaps in a state of shock wondering how suddenly the break-up of a relationship which produced children quickly results in a move out of what used to be home, now with bags as a wardrobe the parent avoiding being a refugee in their own city and being stalked by hunger is forced to take what help there is. And there are those for whom precariousness is a way of life, although they can still cry and wish for better.

Remember the man whose funeral the other six brothers did not attend? You have to fast track through the chain of events which lead to such estrangement. People who become homeless are usually required to accept anything just to survive and contrary to unsympathetic observations nearly all of them have no choice in the matter, they are usually you and I in different circumstances.

I slept out and my friends have given money so others don’t have to sleep rough, and that they will not lose the dignity of that key!

Posted in: Keyworth and Ruddington