Renishaw Hall was packed to the gunnels for the annual Eckington Classic Car & Bike Show, organised by the Rotary Club of Chesterfield on Wednesday 11 June 2014.

There were 500 classic cars, bikes, and scooters, on show from every era for the enjoyment of the 2,500 or so visitors who turned up in their droves to enjoy another superb event.

The winning classic car was a 1925 McLaughlin Buick, originally manufactured in Canada and imported for sale in England. Current owner is Bob Fergusson from Eckington who bought the car 25 years ago as a wreck after it had been garaged in London since 1939.

The winning classic bike was a 1961 500cc Triumph Tiger 100 SS owned by Lawrence Bradley of Bolsover. He has spent the last 7 years renovating the bike.

The winning classic scooter was a 1965 180cc Vespa SS 180 which has been owned by Ray Copley from Killamarsh for the last seven years. He is a member of the Killamarsh Nomads Scooter Club.

Main organiser Stuart Bradley said: “Renishaw Hall is such a splendid location for this charitable event and over the last 10 years the sum of nearly £40,000 has been raised for the local charities.

He added: “I want to thank everyone for their wonderful support once again and look forward to seeing everyone at Renishaw Hall in June 2015.”

There was musical entertainment from Direction Theatre Arts, variety of stalls and amusements, plus refreshments and bar. The event was sponsored by Autoworld, one of the leading New and Used Car dealerships in Derbyshire and the Midlands. 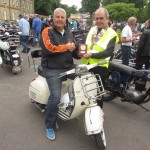 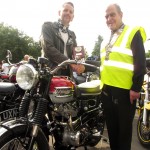 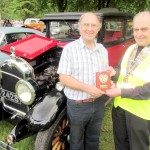 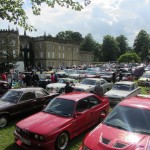