Since starting life as a humble PE teacher, Valerie Leivers has become an iconic a beacon of hope for would-be women achievers in male dominated environments.

Her first success was promotion to Head of PE Faculty for both boys and girls – the first female in Nottinghamshire to achieve this.

Val went on to become Deputy Head at Redhill School in Arnold from where she retired due to spinal problems in 1998. After recuperation from four major spinal operations she returned to teaching male prisoners, initially as a volunteer, in Nottingham Prison. She was soon offered a contract and continued to teach literacy and numeracy plus Art for a further 5 years.

Since joining her local Rotary Club (Sherwood Sunrisers in Nottingham) some 19 years ago as a founder member, Val’s great desire to serve the community locally, nationally and internationally has blossomed. She has held many posts of responsibility, including all committee chairmanships, as well as serving as President during 2001 – 2002.

Not satisfied with that, Val went on to progress through numerous different positions, both within her Midlands based Rotary District and nationally. Val was hugely proud to serve as District Governor during 2010 – 2011, breaking no less than 58 years of male domination and becoming the first female to do so!

Val’s achievements within Rotary International have received recognition on many occasions (see below). However, her voluntary activities also extend to other walks of life, including schools and charitable work, both in the UK and abroad.

The crowning glory of Val’s illustrious track record of service is her most recent Rotary Award, “Service Above Self”, from Rotary International Directors for outstanding service, not only in Rotary service but in life in general. As Rotary’s highest honor for individual Rotarians, this award recognizes up to 150 Rotarians annually who have demonstrated exemplary humanitarian service, with an emphasis on personal volunteer efforts and active involvement in helping others through Rotary. Val is the only third female to receive the award in the UK. 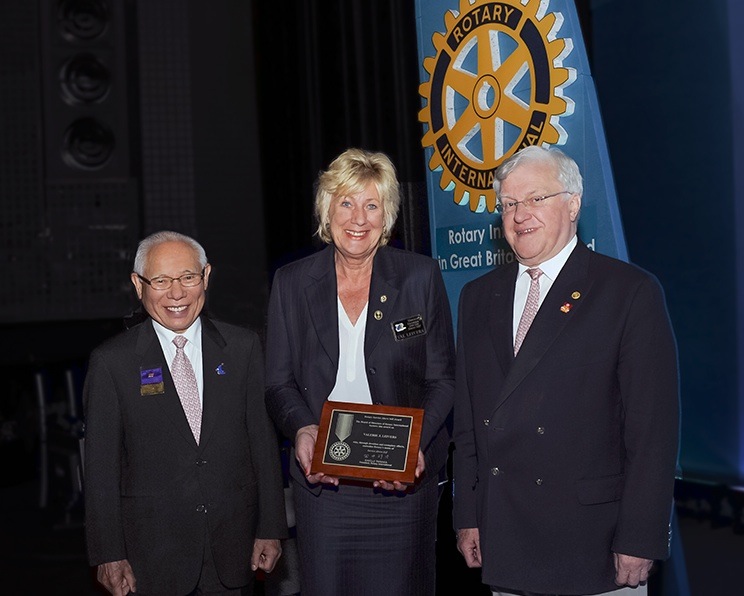 PDG Val Leivers receiving her Service Above Self award